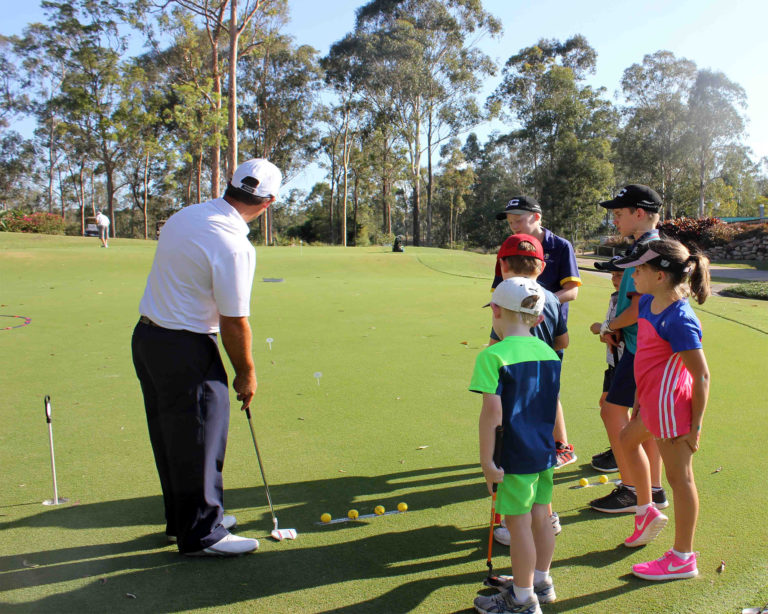 Congratulations to John Collins, who was recently announced as a MyGolf deliverer of the year.

John has been teaching junior golf at the facility for the past three years and began the MyGolf program to create synergy between his sporting schools program visits and MyGolf as the national junior program.

“I was assisted in this process by Gold Queensland co-ordinator Scott Simons, who has been instrumental in helping me to form and grow the current MyGolf junior program at Brookwater,” Scott said.

“Another reason I signed up was to reach a wider catchment of children and not just rely on those who had previously visited the club.”

John’s initial MyGolf program had 25-30 registrations across different levels. That number has since grown to 40-45 per term.

“One of the positives I see with the MyGolf program is that now the PGA and Golf Australia are working together on creating a uniform national program that is recognised all over the country. It makes it much easier for those looking to get into the sport to find out where to begin.”

The program keeps the children engaged by creating numerous new training ideas and golf-related games to play during the sessions.

“Keeping the parents engaged is also key as they are the ones who ultimately do the registering and I keep them informed of when new programs are starting, any competitions we have coming up and any other various opportunities that we have coming up via my weekly newsletter,” John explained.

“For other clubs that are looking to implement a MyGolf program, I would suggest working with your local association and create that link with your local schools through the Sporting Schools program.

“I’d use that as a feeder to provide an opportunity to engage more children, provide them with information about the junior program at your club and hopefully a number of them will sign up.

“For those clubs starting up a junior program, I would suggest working out a plan of how you can provide a consistent structured program – for example, days and times that are consistent throughout the term and year – then find someone who is going to drive the program.”

When asked of Brookwater’s 2016 highlights for MyGolf, John replied: “It was to take a bus trip to Royal Pines for the Australian PGA Championship with all our MyGolfers and their parents for a behind-the-scenes tour of the tournament precinct conducted by Matt Street.

“This trip was provided free of charge to all children who were currently registered in the Brookwater MyGolf program.”

“Brookwater also made its debut in the Brisbane District Pee Wee Pennants at the end of last year, which again was afforded to us through signing up to MyGolf,” he said.

As reward for his hard work throughout the year, John was provided the opportunity to attend the 2016 Australian PGA Championship on the Gold Coast in November, along with accommodation, corporate Sunday hospitality and two entries to play the championship course on the Monday after the event!